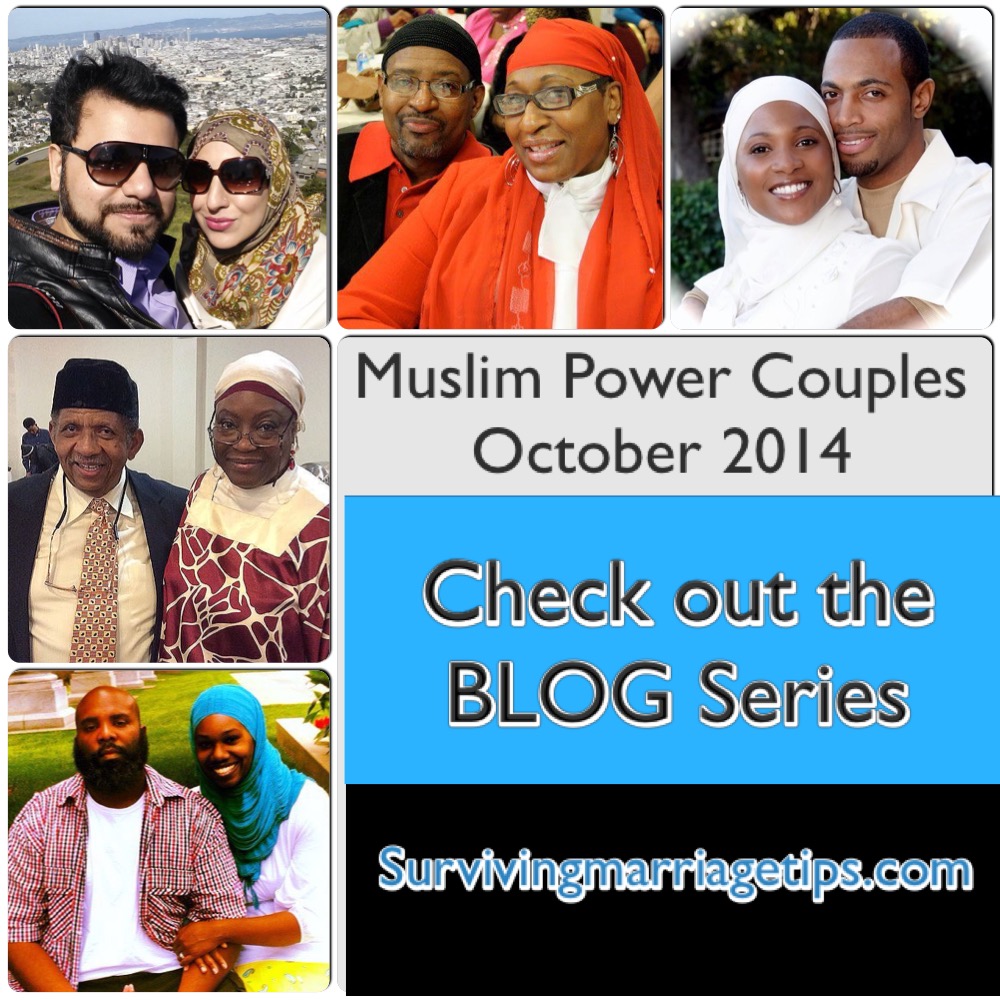 This year has been very reflective for us as we look to celebrate 25 years of marriage in October (27). With that number of years of holy matrimony under our belts, we can’t help but look to both sides of us, younger and older, as to who else is holding down for better or for worse, as well.

We, hubby and I, are fortunate enough to be surrounded by wonderful images of Muslim Couples on Facebook and Instagram. Daily, we see Muslim men and women, married couples, living, laughing and loving out loud. So wow, here came the thought, why not spotlight these duos. Why not show the images of positive, striving Muslims who have fun, who are stylish, who are playful and who enjoy not only married life, but life in general. Trying to decide who to include became a task as we did not want to leave anyone out. Thus, the idea for a BLOG series was born. Why leave anyone out? Why not just pick a group to showcase every month. Problem solved and mission outlined.

This fourth group of couples is filled with a full scale of how we represent. Breaking the stereotype of Muslims as not being fun people is not only being done by these couples, but they share their experiences on Facebook. From zip lining to tubing to inaugural balls to road trips, Muslims set out on life adventures and live to the fullest. Not only do Muslim marriages thrive, but they are also colorful. These couples bring the full spectrum of the rainbow with them and sprinkle the air with a flavorful mist. Who are they you say?

Soooo…here ya go. A few reasons why these “coosome twosomes” put smiles on our faces. Starting from the Bottom L and continuing upward counterclockwise –

This couple not only embodies the word family, they are always reaching out in ways to live a more natural life. From living on a farm property to raising foster kids, to feeding the homeless just becasue, it’s refreshing to see a couple continue to strive and thrive with selfless missions.

This couple are pillars in the community and just recently celebrated 49 years of marriage! That amount of years of marriage is nothing to pass over. Not only are they humorous but are also very thoughtful of others. It makes their 49 years look like riding a bike.

There are a couple of things we love about this couple but I think the most loveable is that they are all over the globe, together. Normally when a husband has a prestigious job that affords him to travel, the wife is left behind at home. For these two…not, not an option. From Los Angeles to Dubai, the table is set for two. Ya gotta love it!

What’s not to love about these two. These guys are also always out and about with the community, family, traveling and sharing it all with pics. And did I mention that they color coordinate the way we do…too cute.

This is a couple that matches talents with brains and comedy…sorts of like us…hahaha. Not only are they taking on new dimensions and territory in media, but they are also bringing up a younger generation grounded in the fruits and teachings of Islam.

Happy, honored, and humbled to be in such great company. This is a BLOG Series with groups of couples posted every month. We have been pretty busy so we have not posted since May. If you missed the May post, CLICK HERE. Be sure to check back for the November post, scheduled for November 27. You never know who you might see.

Survive & thrive in Marriage! To order a copy of our book Surviving Marriage in the 21st Century, CLICK HERE to go to Amazon.