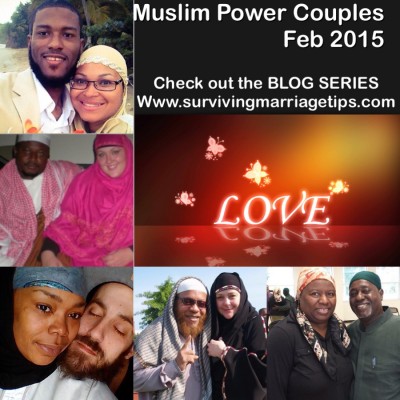 This year, 2015,  after having celebrated 25 years of marriage in October 2014, we are taking things to another level. There is so much going on in the world, and specifically America, that is trying to tear down and destroy Islam and all of the good that it represents, we are putting forth positive images of Muslim Marriages the can’t be denied as a result of maintaining faith and life balance.

We, hubby and I, are fortunate enough to be surrounded by wonderful images of Muslim Couples on Facebook and Instagram. Daily, we see Muslim men and women, married couples, living, laughing and loving out loud. So wow, here came the thought, why not spotlight these duos. Why not show the images of positive, striving Muslims who have fun, who are stylish, who are playful and who enjoy not only married life, but life in general. Trying to decide who to include became a task as we did not want to leave anyone out. Thus, the idea for a BLOG series was born. Why leave anyone out? Why not just pick a group to showcase every month. Problem solved and mission outlined.

This fifth group of couples is filled with a full scale of how Islam is represented. Breaking the stereotype of Muslims as not being fun people is not only being done by these couples, but they share their experiences on Facebook. From Dawah callers to raising kids to feeding and housing the poor to fighting domestic violence, Muslims live life with missions and purposes and also put work into maintaining their marriages. Not only do Muslim marriages thrive, but they are also colorful. These couples bring the full spectrum of the rainbow with them and sprinkle the air with a flavorful mist. Who are they you say?

Soooo…here ya go. A few reasons why these “dream teams” put smiles on our faces. Starting from the Bottom R and continuing upward counterclockwise –

This couple are pillars in the Atlanta Community and encompass several branches of a planted mission. Fighting to eradicate domestic violence in the Muslim Community and feeding the poor are just two areas in which they these two have secured they place in the hearts and minds of thousands.

This couple is very similar to the first couple. Similar missions, different location. What is truly needed is the stance that they take on staying involved and active in dawah, family and social issues. Many can learn from their “can do” attitudes in changing the narrative for a different tomorrow.

Where to start with this couple? They are loved in various languages. Both are “din” knowledgeable and have a calling to spread not only the word for understanding but the history for confirmation of beginnings. From artistry to literature, they cover a range objectives and their pursuits are admirable.

Our west coast couple hails form the pacific northwest. Yes, Islam is everywhere and even though some communities may be small, there are couples that are striving to nurture their marriage and family in a loving environment that consists of faith and real life. (din and dunya)

This is a couple that keeps things fresh. Securing themselves in marriage at a young age and raising family while pursuing a scholarly trek, these two are a great example of teamwork. When a husband needs the support of his wife in order accomplish a goal to better his family, the wife takes to the example of the Prophet Muhammad’s (saw) wife and holds things down.

Happy, honored, and humbled to be in such great company. This is a BLOG Series with groups of couples posted every month. We have been pretty busy so we have not posted since May. If you missed the October 2014 post, CLICK HERE. Be sure to check back for the March 2015 post, scheduled for March 27. You never know who you might see.

Survive & thrive in Marriage! To order a copy of our book Surviving Marriage in the 21st Century, CLICK HERE to go to Amazon.