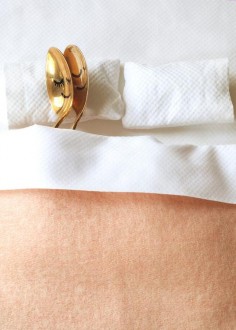 Take the QUIZ! Couples Sleep Battles – Snoring, Spooning and Everything in Between

Take the QUIZ!Couples Sleep Battles – Snoring, Spooning and Everything in Between

Do you spoon with your honey to fall asleep? Or do you sleep (CLICK HERE FOR QUIZ) more than an arm’s length away? A new British study finds that a couple’s sleeping position says a lot about their relationship.

Researchers who asked more than 1,000 people to describe their preferred sleeping position and rate the quality of their relationship found that the closer together people slept, the happier they were as a couple.

“One of the most important differences involved touching,” lead study author Richard Wiseman, psychology professor at the University of Hertfordshire in the U.K., said in a university news release.

Nearly all couples (94 percent) who spent the night in contact with each other were happy with their relationship, compared with just 68 percent of those who didn’t touch, he said.

Even the number of inches apart was a measure of togetherness. Researchers found that 86 percent of couples who slept less than an inch apart from their partner were happy, compared with only 66 percent of those who slept more than 30 inches apart. (No word on the effect of loud spousal snoring in all this.)

As for the most popular sleeping positions for couples:

Interestingly, sleeping position also suggested personality type. Researchers found that extroverts tended to spend the night close to their partners, and more creative types tended to sleep on their left-hand side.

Wiseman said the results “allow people to gain an insight into someone’s personality and relationship by simply asking them about their favorite sleeping position.”