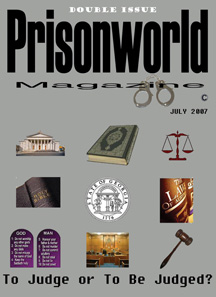 Do You Judge a Book By It’s Cover?

What we are to each other, how we perceive each other and how we treat each other is all relative. In order to classify certain groups, we may choose a status level. Loosely this is based on where you are, what you are doing at the time or what you have done in life. Let’s take for example where you are.

If you are at the courthouse, you may be looked upon differently if you are the judge or defendant. People make perceptions based on first impressions. Even though you may be coking to court totally innocent, someone’s impression of you just being a defendant make presume you guilty in their eyes. Certain people may have personal judgments in that regard, without even hearing your case, and may treat you with discern. It’s a apart of their nature as human beings.

Now let’s say one of your witnesses is a ex-con and another one is a convicted felon currently incarcerated. To the average judgmental person, they may not even listen to your testimony because you have been convicted of a crime and there is no possible way you have anything relevant or truthful to say about another case. Everything you say out of your month is a lie because you have been convicted of a crime and served your time or because you are currently serving time. Many people look down on this and tend to treat those with records condescendingly and disrespectfully. All of these roles are played out every day in a courtroom and unfortunately people are treated differently based on society’s view.

Let’s talk about another mark society has imprinted into people’s minds about status. There are several things that determine your social class. Working parents are considered middle class and most single parents, depending on their occupation are considered lower class. Those with money are, lots of money are considered affluent or upper class. Even within the social classes are divisions and certain things that would make you more prestigious than another.

The middle class is the class of educators, policeman, nurses, firefighters, secretaries, etc. This class could be on the low end of living paycheck to paycheck trying to maintain their mortgages and paying student loans to a group of people that have six figures in their 401K’s. There is less discrimination in this group and more people that volunteer to help one another. Middle class families hold home ownership near and dear as well as working a full-time job and making time for family. There is less discrimination in this class because these people see themselves on the same level with one another. Some look at the upper class as being snobs and some look at them as affluent and hope to achieve that status in five to ten years.

Lower class people tend to be more judgmental and treat middle class and upper class people as non-social. Some lower class people are borderline poverty level or just out of poverty. Many still have a sense of pride and do not like to be treated as charity cases. In this class many may not have a high school diploma or GED and feel a sense of embarrassment when asked. There is also a feeling of inferiority when around affluent or upper class people. These are the norms and expectations one perceives from the outside looking in on other social classes.

Something that is not typical of is in line with the norms and status quo is the situations that fall outside the guidelines or what we call status inconsistency. It is not normal for a 21 year old to still be in high school attempting to attain a diploma. Society has set the norm age of a high school graduate to be between the ages of 17-19. Most often times anything younger or older than that is status inconsistency. If you see a 15 or 16 year old graduating from high school it is normally met with some type of awe, just the same as a 21 year old graduating would be the talk of the town.

Another status inconsistency would be driving a Cadillac and living in the projects. The projects are the city’s housing for the poor and only those with a certain level of income are allowed to reside in these dwellings.  Someone with the means to purchase a Cadillac would fit outside of the income guidelines to qualify for residency.

Typically you don’t see 50 year olds having babies. This is the time for women when their bodies are changing and winding down the reproduction stage. Any woman having a baby at this point is considered high risk and somewhat a miracle. It would make them a mom at the age other women are already enjoying grandchildren.

These are the labels, norms, values, and statuses that have been created in society. Personally I am an outside of the box thinker and go against the rain. I don’t impress easily so someone with money who may be a snob to one would not faze me in the least. I try not to look down on people so someone living in a trailer park with no education is not any less of a person. It would great if more people were the same way.

Until we focus more on our similarities, our differences will continue to label us, divide us and most often times anger us. Can’t we all just get along?