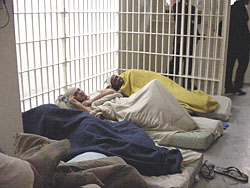 Prison Overcrowding is at the Forefront in Several States – Do Inmates Deserve a Bed?

OVERCROWDING across the country has forced the inhumane treatment of those who are incarcerated. Prisons and jails are being forced by the courts to reduce their inmate populations. California, on of the top five prison states in the US is complying with a recent Supreme Court decision. Read more here.

NATIONAL REPORT ON PRISONS via The Atlanta Journal Constitution

Georgia No. 2 in percentage of prison inmates 1 in 100 now behind bars in U.S. For the first time in the nation’s history, more than one in 100 American adults are behind bars, according to newly available statistics that also show that among the most populous states, Georgia ranks second in the percentage of its residents confined to state prisons.

Georgia’s prison incarceration rate of 0.58 percent of the population — or 5.8 per 1,000 residents — was second only to Texas’ rate of 0.71 percent, according to an Atlanta Journal-Constitution analysis of prison population figures released Thursday by the Pew Center on the States. The national average was 0.46 percent.

The Pew Center, a private group that promotes alternative programs to reduce prison populations, estimated that more than 2.3 million people were in American jails or prisons at the beginning of 2008. The study did not include jail populations for each state. Georgia, the ninth-largest state in the country with an estimated 9.5 million residents as of mid-2007, has the nation’s fifth-largest prison population, a ranking that did not change in the statistics released Thursday.

Georgia had 55,205 prison inmates when 2008 began, according to the Pew survey, which included inmates waiting in local jails for transfer to state prisons. The Pew figure is 4.6 percent higher than the Georgia prison population recorded a year earlier in federal statistics.

Georgia Department of Corrections officials were not available Thursday to confirm the figures or comment on the Pew report. The department in recent years has emphasized working with inmates to prepare them to re-enter society so that fewer of them will commit more crimes and return to prison. A frequent critic of Georgia’s legal system said more changes are needed.

“We have some of the harshest laws in the country that don’t give folks the opportunity for parole in some cases altogether and in others not until they’ve served a long period of time in prison,” said John Cole Vodicka, director of the Prison & Jail Project in Americus. If Georgia reduced its prison population of nonviolent offenders, the state would have the financial resources to create community-based alternatives to prison that include drug treatment and job skills programs and mental health care, Vodicka said. “But, instead, our mentality is just ‘Lock ’em up,’ ” he said.

(The Infamous Tent City in Arizona)

Susan Urahn, managing director of the Pew Center on the States, said budget woes are prompting officials in many states to consider new, cost-saving corrections policies that might have been shunned in the recent past for fear of appearing soft on crime. The report cited Kansas and Texas as states that have acted decisively to slow the growth of their inmate population. They have used community supervision for low-risk offenders and sanctions other than reimprisonment for ex-offenders who commit technical violations of parole and probation rules. While many state governments have shown bipartisan interest in curbing prison growth, there also are persistent calls to proceed cautiously. “We need to be smarter,” said David Muhlhausen, a criminal justice expert with the conservative Heritage Foundation. “We’re not incarcerating all the people who commit serious crimes — but we’re also probably incarcerating people who don’t need to be.”

According to the report, the inmate population increased last year in 36 states and the federal prison system. The Pew report was compiled by the Center on the State’s Public Safety Performance Project, which is working directly with 13 states on developing programs to divert offenders from prison without jeopardizing public safety. The report said prison growth and higher incarceration rates do not reflect a parallel increase in crime or in the nation’s overall population. Instead, it said, more people are behind bars mainly because of tough sentencing measures, such as “three strikes” laws that result in longer prison stays.

Georgia’s Legislature in the 1990s imposed more mandatory sentences and reduced eligibility for parole, requiring longer prison stays for many inmates before they could be considered for parole. “For some groups, the incarceration numbers are especially startling,” the report said. “While one in 30 men between the ages of 20 and 34 is behind bars, for black males in that age group the figure is one in nine.”

STATE CORRECTIONS SPENDING IN THE SOUTH

According to data analyzed for this report, as of Jan. 1, 2008, just over 1 in every 100 adults was behind bars. For the most part, incarceration is concentrated among men, minorities and people in their 20s and 30s.

Source: Analysis of “Prison and Jail Inmates at Midyear 2006,” published 2007 by the U.S. Department of Justice, Bureau of Justice Statistics. All statistics, with the exception of “1 in every 100 adults” are midyear 2006, not 2008 figures.