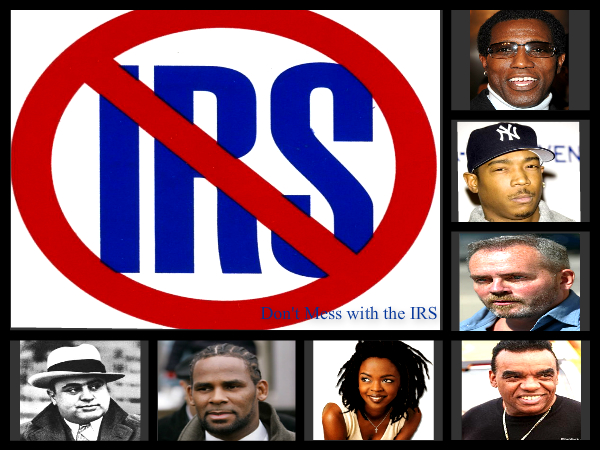 Why Do Celebrities Have Such a Problem with Paying Taxes? And Why Does Only a Handful Go to Prison?

Currently there are at  least a dozen celebrities that are beating off the IRS with a stick. They are hiding behind their financial advisors and pleading the fifth as the greatest collection agency of America comes a knocking. In one of the most high profiled cases of tax evasion, Wesley Snipes is serving a three sentence in a federal institution (see link for address below) for owing the unGodly amount of 17 million dollars in back taxes. His claim, as is many others, is that the responsibility falls on the financial advisors doorstep. Only to a certain extent as we all are responsible for ourselves. The advisor did not make a clean getaway as you can read all about his sentence to 20 years in prison here:

List of Celebrities who currently owe the IRS (not going to prison):

Just last week, rapper Beanie Siegel, another rapper, who has already done time in 2-004 and 2006 for gun charges, is now sentenced to two years for failing to file taxes for three years and owing over $700,000 in back taxes. CLICK HERE to read complete story. The music business and the entertainment industry as a whole seems to be a breeding ground for tax infidelity. There is still a disparity in cases as to who gets prosecuted and who slides on down Hollywood Blvd.

How Far Government Will Go to Make Its Case

“When the government decides they want to prosecute you, nothing will stand in their way,” said Jessica James, a pseudonym for the author of Justice for None, an autobiographical novel about the government’s tactics in a tax fraud trial. James uses a pseudonym because she fears being targeted again. “It’s ironic, because I was just like everyone else who believed that we live in a free country and that we all have the same rights to fair legal proceedings. I discovered that it makes for a great Fourth of July greeting card, but in reality, if they want to get you, they’ll find a way.”

James was only a small target of a government probe a few years ago that included the IRS and the Department of Justice. As a CPA she prepared tax returns for clients referred by an organization that unbeknownst to her was under investigation by the government. She didn’t think she was in jeopardy.

“It’s not like I was some criminal mastermind,” she said. “Apparently, mere association with targeted parties of interest was enough for the government to pursue me in a way I didn’t even know possible.”

She said that when she was brought up on charges, she wasn’t even truly made aware of what they actually were until the government tried to cut a deal for her testimony.

“They keep you in the dark about what’s happening to you, and then they put you in a room and pressure you to take a deal that has you admitting guilt to things you never did,” she said. “But the way they manipulate you, you become convinced that the only way you’ll ever get out of it is to just sign what they put in front of you.”

In James’ case, she was pushed into a plea agreement in which she admitted to falsifying a single tax return, even though the expert tax witness in the trial testified that she did nothing wrong and performed the industry standard due diligence with regard to her work. Because the case was tried in criminal court and not tax court, that evidence carried no weight for the judge. She served 20 months in a detention camp, but as a result of her sentence, was still not barred from doing tax work in a professional capacity.

After her ordeal, she decided she would write about it as a warning to others who think they can take on the government and win.

“There is no way out once they’ve targeted you,” she said. “By that time, they’ve spent so many resources on the case, they have to come away with something. They have to put someone on trial or put someone in jail; otherwise, they look foolish. So, they railroad people and use their naiveté against them. It’s a travesty. We should all feel, as Americans, that we all live under the equal protection of the law. Unfortunately, for those poor souls who find themselves in the wrong place at the wrong time, that protection suddenly becomes less equal than everyone else’s.”

A few short weeks ago Lauryn Hill pleaded guilty to tax evasion. CLICK HERE to read story. Lauryn Hill’s fate has yet to be decided at the time of posting. Even though she has pleaded guilty and promises to pay the taxes she could still possibly do prison time with a hefty fine. She does not feel self-entitled in any way and wants tot do the right thing.

The questions still remains, had she or any of the others in this article not been in the public eye, would prison even be an issue?