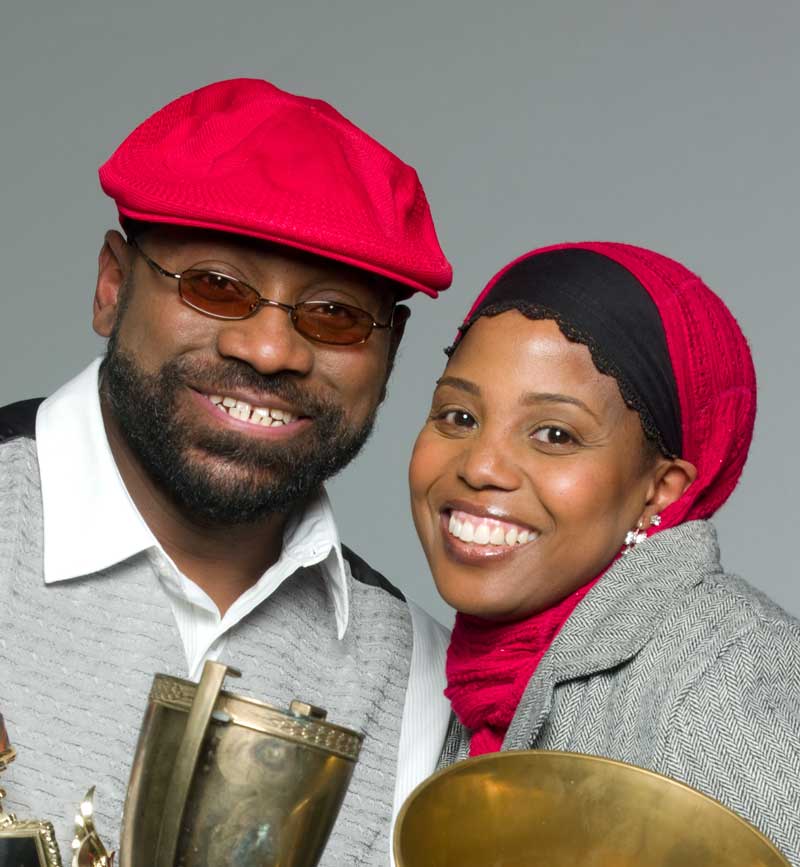 Atlanta, GA – When we consider the state of marriage in the US, the outlook is dismal. But you wouldn’t know that after sitting through a workshop, media interview or twitter chat with Rufus and Jenny Triplett. They are one of the few professional husband and wife teams who do just about everything together. Having survived twenty five years of marriage, they are still attached at the hip on a daily basis. The couple met in the late 80’s when Rufus was singing, writing and touring with the platinum R&B group, Ready for the World. Jenny was an intern at a radio station and headed the marketing outreach team for the act.

Rufus and Jenny Triplett were honored in Ebony Magazine (February 2012 Issue) as “Couple of the Year.” They always kept it 100 percent real during their two plus decades of matrimony. The couple has survived military service, a head on collision, incarceration, raised three young men, run their own multimedia company and are celebrating 25 years of successful marriage in October. They have been featured in a wealth of TV, radio & print media as marriage tipsters, which include REDBOOK, Ladies Home Journal, The Better Show and Huff Post Live.

Their co-authored book, Surviving Marriage in the 21st Century, did so well when first released in February 2013 that it has been picked up by Motivational Press for major distribution. The book is now available for purchase in brick and mortar stores in 12 countries, including the Canadian chain Chapters Indigo. The Triplett’s have toured across the country doing book signings and marriage workshops just from the buzz that has been created by the book.

They recently teamed up with social media personality Jai Stone who is also the managing editor of Black Love Forum and a regular contributor to Essence.com for a Google Hangout to discuss Making Your Marriage and Your Lifestyle Your Brand. They also touched on how they wrote, promoted and sold a best –selling book and answered a few questions regarding their upcoming special on the TLC Network which features the book and the Triplett’s in their element of providing marriage tips. This interview can be viewed (below) 0r on their Rufus and Jenny YouTube Channel.

Out of all their many trials and tribulations the Triplett’s are acknowledged for their faith, perseverance and commitment. Their seemingly plain and simple approach has resonated through their marriage tips and relationship advice given to newlyweds, engaged, dating and long term couples. Surviving Marriage Tips is more than a book of general rhetoric. Co-written with the help of an app, it is a book of relatable experiences from the viewpoint of a man and woman, in their own humorous way, who committed to the institution of marriage at the young age of 21.

The Triplett’s are the owners of Dawah International, LLC, a multimedia company which manages an online community thru Prisonworld Magazine and co-host their own weekly radio show, the Prisonworld Radio Hour, which airs in podcast syndication to iTunes and tunein. Their radio show draws a global audience of over 1.2 million monthly listeners including distribution within the prison system.

As a husband and wife team, Rufus and Jenny readily acknowledge their individual male and female perspectives but both agree that communication is the greatest survival tip. Their multiple appearances on “Huff Post Live” talking about the various disagreements married couples have has been well received by the producers and viewers of the show that they are show favorites. Their appearance on “Family Court with Judge Penny” and “Dr. Phil” garnered rave reviews for their parenting philosophies. Jenny has appeared on “The Mike & Juliet Morning Show” giving some words of wisdom to “The Real Housewives of Atlanta” and she is also a prison and relationship pundit contributing to Loop21, Reuters and has provided commentary for CNN, Brides.com, Black Enterprise Magazine, MSN.com and the Los Angeles Times.

For more information about the Triplett’s and their Best Selling book Surviving Marriage in the 21st Century, log onto https://rufusandjennytriplett.com or you can find them on Twitter with almost 9,000 followers @Prisonworld and their new love handle @OurMarriageTips. They can also be reached at 678-389- 2646.

NOTE TO MEDIA: Rufus and Jenny Triplett are available for interviews and for a press review copy of the book, contact info@rufusandjennytriplett.com CLICK HERE to go to MEDIA PAGE