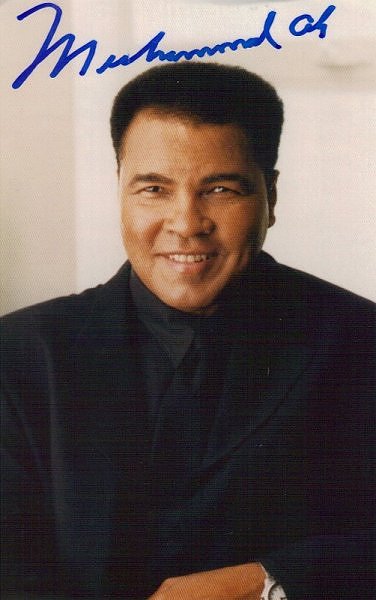 “I strongly object to the fact that so many newspapers have given the American public and the world the impression that I have only two alternatives in taking this stand: either I go to jail or go to the Army. There is another alternative and that alternative is justice. If justice prevails, if my Constitutional rights are upheld, I will be forced to go neither to the Army nor jail. In the end I am confident that justice will come my way for the truth must eventually prevail.”Muhammad Ali – from his official statement refusing induction to the armed forces (1967)

The Day I met Muhammad Ali

I can actually remember it like it was yesterday, wouldn’t you? He came to my aunt and uncle’s home because they knew each other from back in the day. My uncle knew some of everyone but to have the CHAMP come to dinner was something you never thought in life would happen. As I got over my excitement, I relished in his stories. He is such a great story teller and just as funny as you saw him on television. Moreso he related the stories to our lives. What he was actually teaching was wisdom. His message to me and my brothers and cousins was to be so bad (good) in what you do that you could even murder a rock. Be the best. Be THE GREATEST!

I knew we would be able to get a photo opportunity with the Champ but what I did not know is that he would be interested in me and my family writing a jingle for his cookies, Champ Cookies. I would let you hear it but I don’t have a copy. That is one of those things that you gotta track down from the studio for posterity. Maybe one day I will find the time. But it was catchy and the Champ loved it. He loved it so much that we actually got invited to his home in which was in Chicago at the time. Now I was blown away. First the Champ comes to visit and then we get to go visit him. Who does this happen to?

As you can see by this picture (below) I did not listen to his wisdom on serving my country and at the time felt bad that I didn’t. I entered the military proudly in March of 1989. I served in the The United State Marine Corps as a chef during the Gulf War. My placement in Washington DC, and cooking for officers and the Commandant of the Marine Corps kept me from overseas and in the midst of battle. Maybe it was divine intervention that I could stay at home with my wife and two small sons. Maybe it was God’s plan that I could have the best of both worlds. Either way, I did not have to fight a war knowing that this country is unjust in many ways and the Constitution is not justice for all. I had to think that someone was watching over me and it all worked out for the best. Thanks Champ for the wisdom. It was passed on to my sons and last night I murdered a rock.