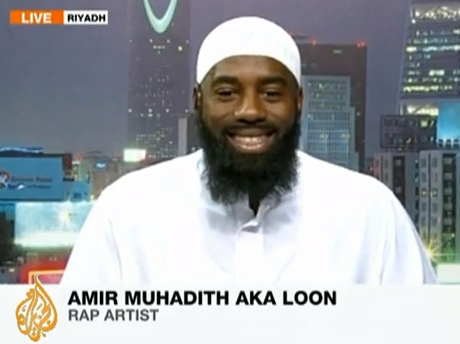 We have forwarded him Prisonworld Magazine as you can gift any inmate to help keep their sanity while incarcerated.

Former Bad Boy artist Loon, who converted to Islam a few years back was arrested on drug charges back in 2011 for committing felonies during 2006-2008.  And thanks to the federal indictment papers just now coming to light and him just getting arrested (again) in Belgium the whole story is coming to light and smelling really fishy.

INFORMATION FROM 2012>>> Loon, aka Chauncey Hawkins aka Amir Junaid Muhadith, was arrested and indicted for felony heroin distribution in North Carolina back in May of 2011, but found asylum in Algeria after initial release.  Just recently, he was spotted in Belgium and taken into custody, and has now been extradited back to the U.S. The nature of the charges, the curious circumstance of charges being applied so long after the actual crime allegedly occurred, the invocation of the “Patriot Act,” and a seemingly deliberate effort to arrest him abroad, all point toward an unusually aggressive and suspicious application of law for brother Amir, a known personality who has proven to be a vocal and effective Dawah in several countries for various organizations.

The US government has used the fact that the charges originated on the federal level to freeze all of his monetary assets, thus leaving him and his family without any means to hire a dedicated legal team to effectively dismiss these spurious and dubious allegations.

INFORMATION FROM 2012>>> Brother Amir was incarcerated in Belgium’s Worst Prison for over five months and was held in isolation 23 hours a day while he awaited extradition to America. After the help of Allah, his Muslim brothers and sisters are his last resort. His family is reaching out to the Ummah as a last resort in hopes to raise enough money to assist Amir, who sacrificed a life of luxury and wealth for the sake of Islam, in his fight for justice.