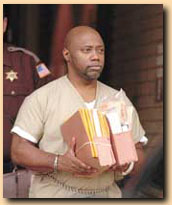 Abraham Kennard, convicted in February of bilking $9 million from 1,600 churches and nonprofit organizations nationwide, was sentenced to 17.5 years in prison today in U.S. District Court in Rome.

Kennard was also ordered to pay $7.9 million in restitution to victims and $598,000 to the Internal Revenue Service.

Those charges stem from allegations that Kennard used his company, Network International Investment Corporation, as a vehicle to scam money from churches in 41 states between May 2001 and October 2002.

Rome — A federal jury has found Georgia preacher Abraham Kennard guilty of bilking nearly $9 million from more than 1,600 churches in 41 states in just over a year.

The jury, which began deliberating Friday after a three-week trial, found Kennard guilty of all 132 criminal counts — ranging from money laundering to tax evasion to mail fraud.

Kennard, 47, convinced church leaders to invest in his company. Church leaders were assured they would eventually get their money back more than 100 times over — up to $500,000 in a grant or a forgivable loan. What they actually got, prosecutors say, is duped.

During his trial, the government argued Kennard took advantage of the nation’s tight network of black churches to launch a fast-growing pyramid scheme.

Kennard spent hundreds of thousands of dollars renting private jets and limousines as he flew and drove across the country to give presentations to churches and their members, according to federal prosecutors.

The federal government has seized, among other things, 20 cars, including Cadillac Escalades, Cadillac Sevilles, Cadillac Devilles and Mercedes Benzes, plus a Harley Davidson motorcycle and four personal watercraft.

A hearing is being held today to divide the material assets Kennard retained. A sentencing hearing has not been scheduled.